Tobacco smoking is one of the leading causes of deaths worldwide. It kills many of its users, 80 percent of whom live in low-and middle-income countries. One of the six primary tactics adopted by the WHO to counter the tobacco epidemic is promoting cessation – asking people to quit tobacco use.

But achieving high levels of quitting to abstinence in the tobacco smoking population is an unrealistic goal. Successful quit rates are abysmally low, with rates of resuming smoking are high and with a number of smokers wishing to continue smoking.

Consequently, there is a pressing need for alternative and more efficient means to reduce or prevent harm in those who would end up returning to smoking.

The article highlights why harm reduction is important, what are the ways to achieve harm reduction, (particularly the use of snus, heated tobacco products and e-cigarettes), and what are the barriers to use of such alternatives. This article is not a systematic or narrative review; it is an overview of recent studies on these products or devices.

A big reason people return to smoking tobacco is that, it is pleasurable, and has seemingly positive effects on cognitive processes, from nicotine. According to tobacco use expert Ray Niaura, nicotine can improve level of attention, fine motor coordination, concentration, memory and speed of information processing. It can also help managing stress, anxiety, depression, and body weight.

But combustible tobacco products like cigarette or cigars, consumed over a long period of time for nicotine is responsible for major damage. Can nicotine use, thus, be decoupled from cigarette smoking?

What is Harm Reduction?

The term harm reduction is used for a public health strategy to reduce the harms caused by behaviours, including drug use. The tactics include revising regulations and bans that increase harm, empowering people with accurate information and offering alternatives such as the adoption of risk reduced modes of use (for example, clean needles) and the substitution of lower-risk drugs (for example, methadone maintenance – an opioid treatment alternative ). For tobacco harm reduction, the goal is to prevent or reduce the damage caused by the toxins from tobacco smoke for smokers unable or wishing to continue smoking mainly through cigarette substitution. 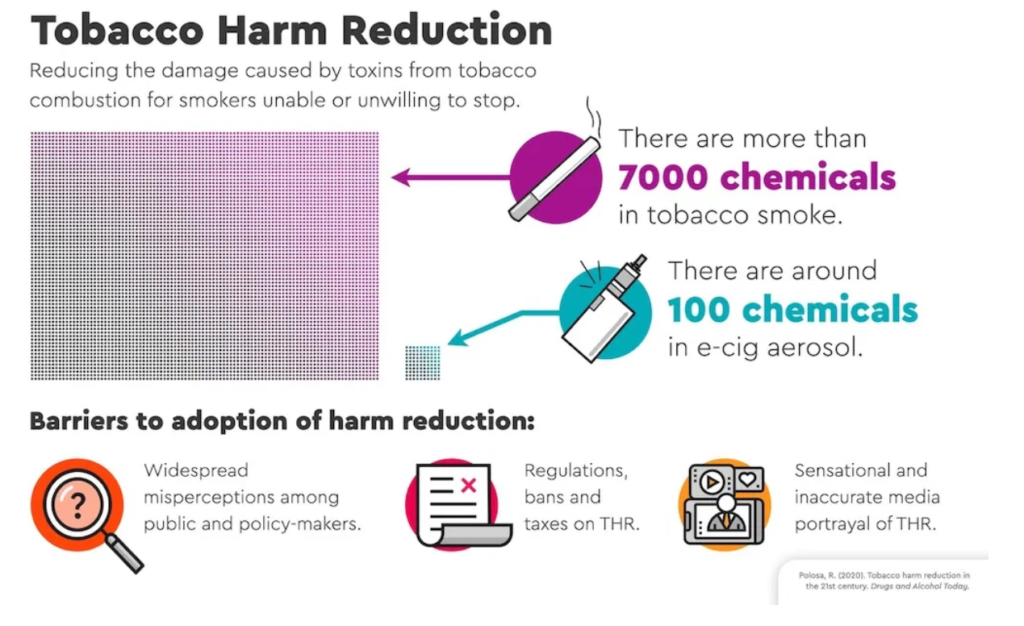 The WHO’s Framework Convention on Tobacco Control (FCTC) acknowledges harm reduction as an integral part of a comprehensive approach, but it does so only in reference to eliminating or reducing consumption. The key to tobacco harm reduction is giving people the knowledge and opportunity to replacecombustible tobacco products with non-combustion products that deliver nicotine with a lower toxic and risk profile and may promote the cessation of cigarette smoking.

Alternative products and their role in harm reduction

Snus is an oral tobacco product with processed tobacco in a paper pouch that the user places in the mouth between the gum and cheek. The oral form of tobacco consumption is noted to be less harmful than smoking. First, the people who used snus vs. smoking are less prone to tobacco related diseases, including lung cancer. A comparison of snus using Swedish men and other European men who had similar daily tobacco use had much lower rates of death from lung cancer (at 87 per 100,000 compared to the European Union average of 220) and cardiovascular diseases (at 72 compared to 170 per 100,000, respectively). Second, the quit smoking rates for snus users were more than 70% higher than smokers.

In 2019, the US Food and Drug Administration announced that “the available scientific evidence, including long-term epidemiological studies, shows that relative to cigarette smoking, exclusive use of these specific smokeless tobacco products poses a lower risk of mouth cancer, heart disease, lung cancer, stroke, emphysema and chronic bronchitis”. In addition, the USFDA observed that the levels of N-Nitrosonornicotine (NNN) and nitrosamine ketone (NNK), two major carcinogens, are very low in Swedish snus.

The value of smokeless products in harm reduction can be seen through an extensive study of over 46,000 US men 40–79 years of age from 1987 to 2010 (US National Health Interview Survey). It found no increases in mortality amongst smokeless-tobacco-users compared to never-tobacco-users for cardiovascular diseases, all cancers and malignancies.

These electronic devices (also known as “heat-not-burn”) heat tobacco to below combustion temperatures, aerosolizing some chemicals but not producing smoke. They produce much lower levels of almost all harmful chemicals compared to tobacco smoke.Heated tobacco products are another category that is gaining popularity particularly in Japan, South Korea, Italy and Russia.

Electronic cigarettes are products that operate by heating and aerosolizing a solution (e-liquid) mainly consisting of glycerol, propylene glycol, distilled water, and flavourings and which may or may not contain nicotine. These products have quickly gained popularity among smokers.

E-cigarettes have a high harm reduction potential. In a recent robust RCT quit rates doubled in participants switching to e-cigarettes compared to those randomized to NRT (nicotine replacement therapy). In another study of 181 individuals tested for biomarkers of chemical exposure, a 97% reduction in toxic chemicals and carcinogens was observed in exclusive e-cigarette users as compared to combustible cigarette users. The prevalence of being quit in the last six years, was three times higher in the e-cigarette group vs those who had never used it.

Perhaps more so than for other low-risk products (other than NRT), vaping is used by people who also continue to smoke (so-called “dual users”). There is much manufactured concern about this. Although it is true that if their smoking is not substantially reduced, the health benefits are not great, nevertheless people who use both products are particularly good candidates for switching away from smoking entirely.

Consumers are discouraged from adopting low-risk products due to ignorance and disinformation. Policy makers interfere with their availability through bans, excessive regulation, and high taxes.

Tobacco harm reduction products are subject to bans in various countries. Snus is banned in Australia, New Zealand and the European Union except for Sweden. 37 countries have banned nicotine-containing e-cigarettes. As of the beginning of 2020, 14 countries have introduced taxes on e-cigarettes.

Studies show that bans of reduced-risk products lead either to their being sold on the black market or users returning to smoking. For example, in Minnesota (US) – where e-cigarettes have been heavily taxed since 2010 – an increase in adult smoking rates and reduced quits have been reported. Taxing e-cigarettes at the same rate as tobacco is nonsense and an estimate projects that this would increase the baseline smoking rate in the US by 8.1% and decrease the quit rate by 25%.

Studies have long established the fact that for adult smokers, nicotine per se does not cause disease. Therefore substituting non-combustion modes of nicotine delivery for smoking results in harm reduction.

But misperceptions about nicotine use prevail. Some believe it is a high-risk factor for heart attack and stroke, while others, even medical professionals, believe it causes cancer and atherosclerosis. “Nicotine plays a minor role, if any, in causing smoking-induced diseases” says health researcher Dr.Neil Benowitz. Snus which includes high concentration of nicotine causes no measurable risk of any disease. It is cigarette smoke, not nicotine, that causes disease risk and cancer, and therefore the need to separate the two. There is a desperate need for better education of medical professionals on the effects of nicotine during their training and through continuing medical education. Through them, there can be the delivery of accurate information to smokers and the public as well.

For tobacco harm reduction to be a workable strategy, the public must be persuaded of the evidence for the lower relative risks of e-cigarettes and snus compared to smoking. Studies conducted in the US show only 17% of cigarette users perceive snus to be less harmful.

Media misrepresentations of e-cigarette studies are causing the public to disbelieve the lower relative risks of products for tobacco harm reduction.

The corporate press uncritically reports every sensational claim about harms from low-risk products, even those that are transparently false. Recently the press spent most of a year repeating claims that e-cigarettes were causing an outbreak of severe lung disease in the US despite it being known this was due to black market tetrahydrocannabinol(THC) cartridges.

Sadly, years of sensationalized reporting that erroneously implicated all vapour products appears to have persuaded large numbers of the public and clinicians around the world to erroneously believe that commercial e-cigarettes are extremely dangerous.

In conclusion, to reduce smoking and to save millions of lives, tobacco harm reduction in the form of cigarette substitution with low-risk products appears to be a promising path. The obvious fact so often overlooked is that quiting and staying quit is difficult to achieve, , and people some like it so much that they do not want to quit. Giving smokers an alternative with efficient nicotine delivery means that they might prefer one of these products over cigarettes, and thereby lower their risks for many diseases. However, given the barriers to use of e-cigarettes, a strong advocacy is needed to bring facts on harm reduction to our patients, families, friends and fellow world citizens.

Link to the study: “Tobacco Harm Reduction in the 21st Century”

Link to the press release: The new Vaping Manual between Science and Real Use

The article first appeared in COEHAR