The next 90 days: India’s ambitious attempt to vaccinate all adults

Prime Minister Narendra Modi’s ambitious decision and the Government’s announcement to vaccinate all adults against COVID-19 by 31 December 2021 is now within reach. At the time of its announcement, the vaccination plan was seen to be both implausible and impossible by many who doubted India’s capacity and capability in dealing with this gigantic task. Some were also skeptical of the Indian State’s capacity to deliver the doses to a very diverse demography across the country. With the quick evolution of the CoWin platform, India has surmounted the challenge of having a reliable vaccination management solution at scale with the capability of working online and offline while providing a verifiable database. With the vaccine run rate of September where India delivered over 230 million doses, and assuming a modest increase in vaccine availability for the remainder of the year—relative to the significant buildup in the past five months—India has shown that it may just be able to dispense close to 1900 million doses by the end of this year.

It is now widely acknowledged among experts that the national vaccination drive is doing well when compared with other lower middle-income countries, and even some middle-income countries. At the end of September, India had managed to administer around 890 million doses among adult citizens. According to government communication at the end of September, more than 45.7 million vaccine doses are still available in stocks with States/UTs, with under 8.4 million doses in the pipeline. Almost three-fourths of the elderly population in India has already gotten at least one dose, and the coverage in the 45-59 age group was even higher. Overall, more than one-third of the 45+ aged citizens in India are fully vaccinated (Graph 1). This is an admirable and astonishing achievement by a lower middle-income country and a feat that, for obvious reasons of scale and size, will have no parallel in the free world. Even as we are within a whisker of meeting the (self-imposed) deadline in terms of number of vaccine doses that we need for the task, some policy posers stare back at us and need to be addressed now to complete the job. And this must be an imperative.

In the recent past, we have witnessed that countries confronted with new waves of the pandemic have had two distinct characteristics; the relatively richer countries are seeing waves that are moderate while the poorer countries in general are experiencing their peak surges. This also typifies the global “Vaccine Divide”. The US represents a starkly unique geography where we have seen both play out simultaneously. The vaccine divide in the US is shaped more by political and ideological factors with deleterious consequences.

Experts have observed a general “decoupling” within the pandemic landscape, where countries and communities with access to vaccines are able to separate the intensity of transmission (case numbers) and the adverse outcomes such as severe disease, hospitalization and death. Many nations with a high number of vaccinated people are now beginning to approach SARS-CoV-2 like an endemic virus. However, while there has been a general lowering of cases and adverse outcomes these past days, it would be dangerous to believe that we are at the tail of the pandemic. Mutations and large swathes of unvaccinated people offer the virus a chance to continue to be lethal and for the pandemic to take a dangerous turn. Vaccinating all adults and teenagers still has to be a national priority. India set itself an ambitious aim of inoculating all its adult population by the end of 2021. That means, in real terms, giving two doses of vaccines to around 950 million people—delivering, in all, 1.9 billion doses. As on the end of September, India had managed to administer a total of 889 million of those doses, with 650 million being first doses and 239 being second doses.

Over the remaining days in this year, India needs to deliver over a billion doses and deliver them as per the dosage cycles of the two main vaccines—Covishield and Covaxin—currently dominating the vaccination drive. This would mean India now has to achieve the next quantum leap and achieve more than 11 million doses a day on average, which is a ramp up of 46.5 percent in the last three months.[1] With more vaccine manufacturing facilities coming online and given the substantial scale-up already achieved by the vaccination drive, it just may be possible, judging from past experience.

But the rub lies elsewhere, the mainstay of the Indian vaccine effort is the Serum Institute’s Covishield, which accounts for approximately 88 percent of all doses delivered as of now and has a dosage cycle of 12 weeks (Graph 3). As of October 1st, there were nearly 300 million adults who were yet to receive the first dose. Some of them can be vaccinated with Covaxin or Sputnik-V (both have a dosage cycle of one month or below) while a substantial number of them will have to spill over into January if the Covishield dosage cycle of 12 weeks is to be followed. The policy poser, therefore, may not just be about a vaccine capacity ramp up of about 47 percent, which is eminently doable, but the composition of the vaccine candidates given the dosage gap.

There are three hypothetical responses that can be considered by the health ministry. First, is there a genuine possibility of Covaxin finally ramping up its production and stepping up to the plate? Even if they were able to double their production, we will still have a large, uncovered population unless Sputnik V exponentially increases its production. The second option is to reduce the gap between two doses of Covishield. This will allow the bulk of the vaccine capacity to be used for second doses in much of November and all of December. And the third, of course, is that a new vaccine with large capacity (doses) and shorter dose gap enters the scenario latest by October end.

In a situation of major delays in the scale-up of all the other candidates, it is Serum Institute’s “over performance” in Covishield production, going beyond even the most optimistic projection five months back, that has helped India’s vaccination drive.

Of the other major vaccines that will be available in India soon, application for emergency use authorisation of Covovax is likely to be made only by the end of 2021, according to Serum Institute and, thus, it is unlikely to make a big difference in the timeline we analyse here. Similarly, reports indicate that a surge in cases in Russia will affect Sputnik-V’s plans in India, although the vaccine with a short 21-day dosage gap would be ideal, given the tight timelines. Biological-E’s production of Johnson & Johnson’s vaccine will likely take off only by the end of the year, and no information on timelines is currently available. Zyduc Cadila’s three dose vaccine is also bound to start production at a modest rate of 10 million doses a month; and as the first vaccine approved in India for use in children, it may not make a difference in the adult vaccination numbers at least in 2021. Although Zydus Cadila’s doses can be available for the adult vaccination drive, as the only vaccine yet approved for children, the initial doses should go to children with co-morbidities.

Covaxin is reportedly expanding production from 35 to 55 million doses from October onwards. The Government of India has also clarified that, for now, there is no plan to reduce the mandatory three-month wait for second shots of Covishield. However, with more doses being available for the national vaccination drive, this may be revisited.

(Table 1). Available information till date suggests that there are three factors influencing the December deadline of the immunisation drive, namely, manufacturing capacity which is fast improving; the three-month gap between Covishield doses; as well as the need to have an exportable surplus. Scenario 1 assumes that the availability of vaccines will remain at the September 2021 levels, which is around 230 million per month. In such a scenario, it will be possible to vaccinate all adults in India only by February 2022 and at the end of December, India will be 321 million doses short (Table 1).

Scenario 2 assumes an average 46.5 percent increase in the vaccine doses compared to the September 2021 levels. Given that between May and September, daily vaccine doses administered increased by 400 percent, such an increase is not impossible. After Covishield recently announced that its production capacity has been ramped up from 160 million doses a month to 200 million doses, reports already suggest that that the company will be delivering 220 million doses in October, indicating an accelerated scale-up like in the previous months. In Scenario 2, India will vaccinate every adult with one dose in December 2021, and with both doses in January 2022, with 251 million second doses of Covishield spilling over to January 2022.

These scenarios ignore Sputnik-V as the surge in cases in Russia is holding up imports of vaccine components. Indeed, India has not made vaccination mandatory, and a considerable proportion of the adult population will be reluctant to take the jab voluntarily, for a range of reasons. Our analysis assumes that any Indian citizen above 18 years of age should be able to demand and receive two vaccine shots within the timeline. Thus, it does not discount for vaccine hesitancy and considers every eligible individual in the analysis. This analysis also does not consider possible innovations in the future like fractionation of COVID-19 vaccine doses among the relatively less vulnerable population or mixing of vaccines (something we already do within other disease control programmes in India), which can extend limited supplies, reduce mortality and also accelerate the journey towards universal vaccine coverage. 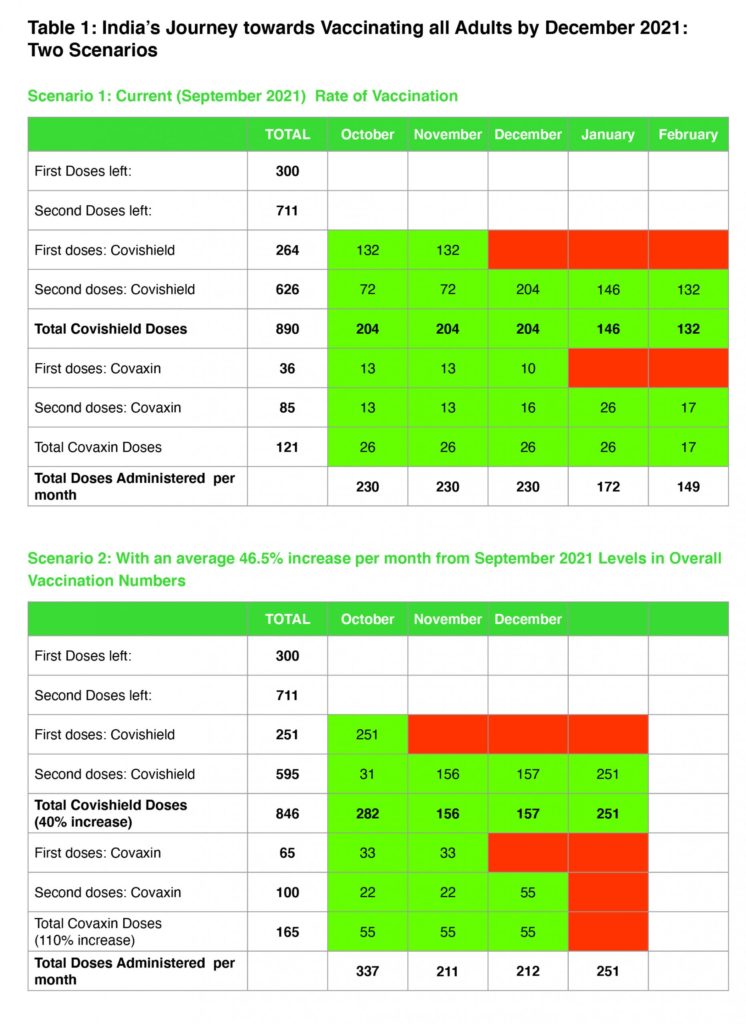 As is clear from the numbers, in light of the global context, scenario 2 seems feasible, whereby all adults are covered with at least one vaccine dose by the end of November 2021, and their respective second doses spill over into 2022. For a country of 950 million people over 18 years, securing universal coverage of a single dose in 11 months will itself be a commendable achievement. Scenario 2 also accounts for considerable exportable surplus of vaccine doses from November 2021.

Even as India accelerates its vaccination process among adults, unfortunately, there is no such thing as herd immunity threshold exclusively for the adult population. Herd immunity for COVID-19 will have to be achieved at the overall population level, and for a very young India, this means a need for a substantial number of its under-18 population to be vaccinated. Even if India manages to inoculate all its willing adult population by December 2021 or even January 2022, unless its hundreds of millions of children are vaccinated, the country cannot reach anywhere close to herd immunity levels. Achieving that, while respecting renewed commitments to export vaccines to the rest of the world, will be the next ambitious goal for India as the country tries to turn COVID-19 into a manageable risk, controlled by access to vaccination and responsible behaviour.

This exercise proves that the goal of vaccinating all adults by 31st December 2021 is not as unrealistic as it may have seemed earlier. As India continues to steadily ramp up Covishield and Covaxin production as it has in the past, it can achieve the ambitious tasks of vaccinating all adults by January 2022, sharing doses with the world, and to also consider provision of booster doses to severely immuno-compromised citizens.

[1] Based on calculations done by the authors using the statistic that between May and September, daily vaccine doses administered increased by 400 percent

The article first appeared in ORF