Climate and Energy Priorities for the New U.S. Administration

President-elect Joe Biden has outlined a nationwide goal for the United States to produce 100% carbon-free electricity by 2035 and reach net-zero emission by mid-century. Doing so would move the country from its current 40% renewable energy mix to a completely decarbonized electricity sector. The administration will have to balance expected plant retirements in the next decade with advances in solar and wind power installations, while accounting for nuclear power playing a role in that mix. Facing likely opposition from a Republican Senate, they will have to use every tool at its disposal to triple renewable generation capacity and leverage its power to finance cleantech development. Doing so puts the U.S. on a path to achieving what is needed to combat climate change.

There are levers in place to produce, move, and consume clean energy and tools to scale them. By using these levers, expanding renewables, financing next-generation clean technologies, and modernizing the country’s electric power grid are three trends we hope to see play out over the next few years—at a pace that matches the urgency of the climate crisis.

The seeds of innovation in clean energy and climate technologies have come from a mixture of public and private funding. Risk-taking in the clean energy arena has led to the creation of innovative materials to reduce the cost of wind turbines and electric cars, developed ways to cut energy use in heating and cooling systems, and built (nascent) fusion reactors to potentially unlocking a virtually limitless and clean power source.

One of the largest sources of U.S. public investment for technology to combat climate change comes from federal financing programs. In the absence of private lenders averse to previously unproven business models, the U.S. Department of Energy (DOE) has kick-started clean energy programs that have propelled industries. For one, the utility-scale solar photovoltaic industry received a defining boost with a capital injection from the U.S. energy loan program.

Under the DOE, two financing programs stand out for delivering clean energy innovation:

At the beginning of this year, a bipartisan group of House representatives introduced a bill for the establishment of a technology-neutral tax credit for clean energy and storage. It would create a tax credit of 30% for innovative clean technologies to break into the market—a financial award for bringing clean energy onto the grid and developing new storage solutions. If the solar power tax credit (ITC) or the wind power one (PTC) is any sign of the effectiveness of these federal tax credits, then we can expect a similar takeoff in cost-competitive clean energy technologies from their deployment. That matters the most for the next puzzle pieces to building a clean energy economy: storage and carbon capture and sequestration and utilization (CCS/CCUS). Improved technologies in those domains would mean solving the intermittency issue of renewable energy at scale and build up at cost-CCS/CCUS for retrofitting natural gas and coal infrastructure. We would also need hydrogen for heavy industry sectors, and a larger swath of biofuels in the energy mix. But those prongs would shift the direction of travel toward a pathway with enough carbon abatement and removal to get in line with the Paris Agreement’s goal of stabilizing global average temperatures.

For the past four years, the U.S. has ceded its stock in the global clean energy investment race, while China and Europe have pushed ahead with technology research and development. American innovation must be re-ignited. The mechanisms to do so are built into the federal government, outlined below. Even if it means deficit financing, to meet the challenge of the climate crisis, appropriations for clean energy technology has to grow substantially year over year. It is probably the most politically workable way for an eager White House to ignite meaningful progress in building a clean energy economy.

However, research, development and demonstration projects are not where the financial flows should stop. The federal government’s purchasing power can spur markets for clean energy products and carbon capture sequestration—necessities for meeting potential net-zero targets. Biden could require federal agencies to buy a growing share of renewable electricity as part of a mandate to cut the government’s polluting emissions, displacing dirty fuels. Technology-neutral emissions performance standards would also provide a mechanism for low-emission uptake. The latter is administered not only to utilities but also as a standard for cars and heavy-duty vehicles, helping to cut transportation emissions and improve the competitiveness of the U.S. electric vehicle market.

The first Monday in February is typically the day Congress receives the President’s budget proposal; requests for new policies, programs, or funding changes submitted, and policy preference defined. Alignment on funding clean, affordable, and secure energy must come from the House, Senate, and Executive in next year’s appropriations.

The current spread in public financing does not give alternative energy the needed attention. The largest share of the government’s public investment dollars goes to economic affairs, defense, and health. The Congressional Budget Office estimates that spending on energy conservation, pollution control and abatement, and energy efficiency and renewable energy programs represent about 1% of the U.S. federal budget in 2020. Spending on national defense and health, in comparison, represents 16% and 14% respectively, while spending on education 2%. Much of the work to get the U.S. on a path to 100% clean electricity will depend on a concerted budget that focuses on funding cleantech innovation. Budget appropriations are a necessary tool to make that happen. 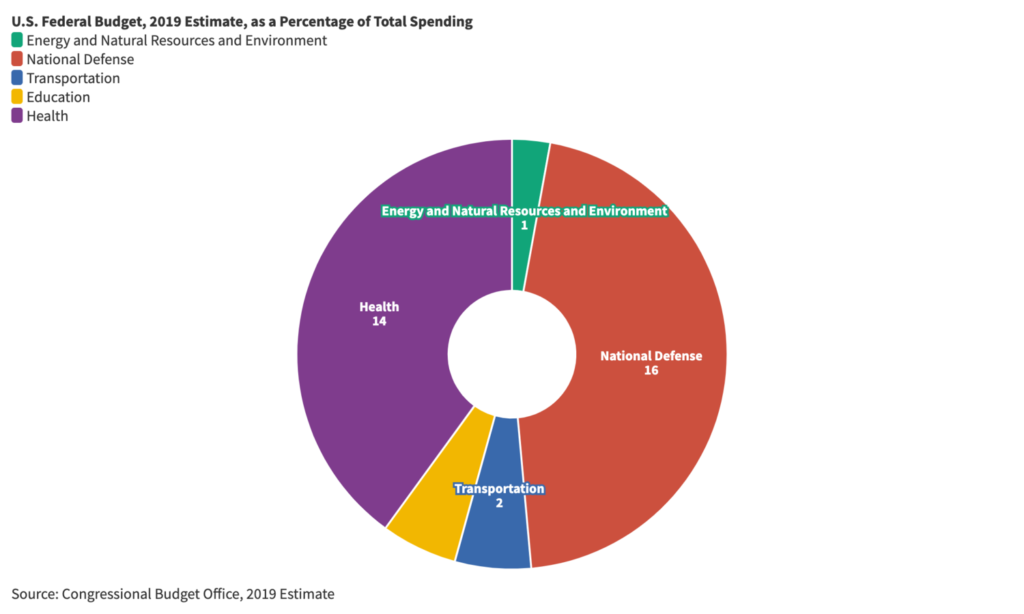 Microsoft, GM, and the oil and gas giant, BP, have set an internal carbon price that establishes a monetary value on emitting a ton of carbon. It works as a levy that increases operating costs based on the quantity of greenhouse gases the company emits. Money raised from that levy is then pumped into carbon reduction projects, such as offset programs, energy efficiency measures, building retrofits, etc. An internal price that covets the whole federal government would set a precedent for the country’s collective duty to combat climate change. Each government agency would have to abide by the price per ton of carbon and adjust its budget, operations, and assets to align with clean electricity and transportation, reduced waste, and improved energy efficiencies.

Before an internal carbon price is installed, the federal government needs to reassess the Social Cost of Carbon (SCC). After a four-year relinquishing of environmental assessment of regulations, a new inter-agency Working Group must determine the true cost of carbon given the urgency of the climate crisis and mounting impacts experienced as more frequent storms and wildfires. The SCC determines the costs and benefits of emitting one additional ton of CO2 in monetary terms. To rectify the market failure that has allowed for climate change, we need a price point to understand the value of a dollar invested to mitigate the problem against the cost of its impacts later. That’s what the SCC does. And it provides the groundwork for a national carbon tax.

Some economists argue the SCC be set to $52. Others argue for reverse engineering: finding the optimal SCC should begin with the Working Group selecting a net-zero CO2 emissions target, coupling it with near-term emission reduction goals, for a price between $34 to $64 per metric ton in 2025 and an average of $139 in 2030. In any case, a higher carbon cost valuation is expected from the moderate price tag established during the Obama presidency at $21 per ton. Ten years have passed since, and climate economics and science of the issue have improved. The discount rate at which the cost of future climate damages is estimated in their present value should, at least, no longer be producing the dangerously low SCC price tags of $1 to $7 that the Trump administration estimated.

Climate regulations that use new estimates and account for developments in emerging climate solutions and their cost decline over the past ten years are better equipped at ensuring the safety of communities, businesses, economies, and the most vulnerable groups of society disproportionately affected by rising impacts from a warming world.

Build a Piece of the Green New Deal

When talking about the energy transition, we are not only talking about the large-scale deployment of renewables. What we need in tandem is the mass-connectivity of electricity transmission lines that form a country-wide network. The vision by those working in building distributed, smart networks with millions of active endpoints is one that replicates what the Interstate Highway System of Dwight D. Eisenhower’s post-war period did in changing America’s economic landscape. A national smart grid that safely and efficiently manages power supply and demand can serve homes, businesses, and industries in a balanced way. However, peaks and baseload management for intermittent, clean energy remains a sticking point for mass deployment. A smart grid system can manage the flow of solar and wind energy from the grid to local generators. And when volumes of electric vehicles come online, consumers can become “producers”—whereby personal electric vehicles or solar panels send leftover stored energy back to the grid and get paid for doing so.

A transformation of America’s power grid is legacy-defining. It won’t be cheap, nor quick. The complex system of millions of nodes in a smart grid system costs upward of $40 billion annually from 2031 to 2050. An earlier study from 2011 by the Electric Power Research Institute (EPRI) expects a cost of nearly $500 billion spread out over the next 2020 years, with average electricity bills increasing by 50% in 2050. We’re due for an updated report on the investment needs, policy levers for capturing those investments, and the consumer costs incurred. But the cost competitiveness and magnitude of clean technologies–from batteries to photovoltaic cells–are notoriously underestimated. Don’t fret.

The fall in renewable costs over the past decade, particularly solar PV cells and onshore wind, have been radical. Respectively, they have each seen a drop of nearly 90% and 70% in the price of electricity generated from these renewable sources. 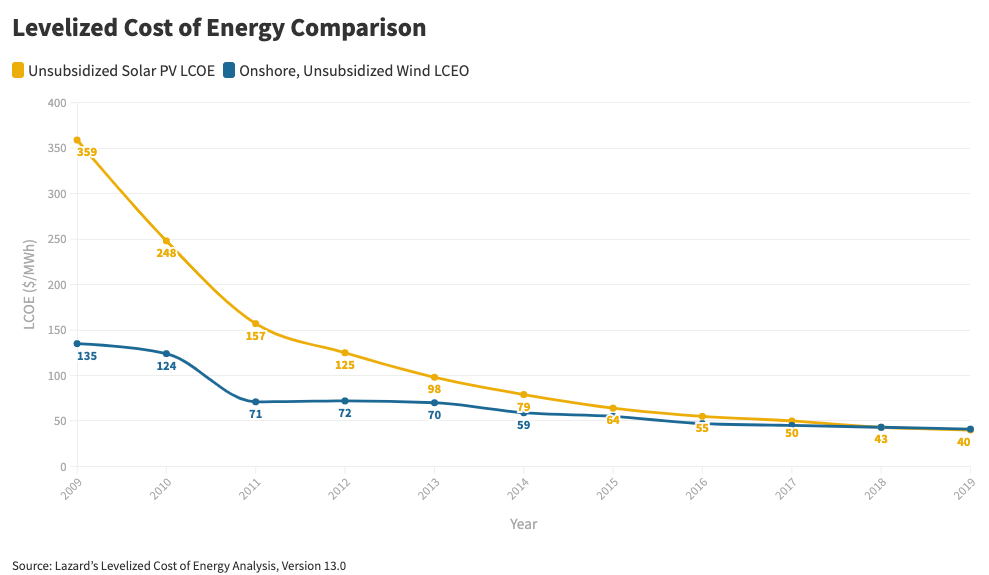 The incoming Biden administration has outlined a $400 billion investment over ten years for public investment in clean energy and innovation. He has even called for the establishment of ARPA-C, “a new research agency focused on accelerating climate technologies.” America’s competitiveness depends on ensuring that financing is deployed.

In their first hundred days, the administration can look to past financing achievements as something to build on. That includes the Department of Energy issuing about $3.5 billion in Smart Grid grants, under the Smart Grid Investment Grant (SGIG). America’s crown jewels of national research into clean energy technologies and efficiency gains sit with the 17 National Laboratories under the DOE. A fresh injection of public capital would go a long way to ensuring the acceleration of clean technology deployment throughout the economy. And cost-competitive renewable electricity generation should serve as the wind beneath their wings.

Modernizing the grid is foundational to enacting the goals of the Green New Deal. A Grid Modernization Act would require significant progress on an across-the-aisle, bipartisan rapprochement. But implementing tangible policy details can also be done through other means, including directing the military to shift its utility-sourced power to clean energy; work with states to institute clean energy mandates; and establish stricter national fuel efficiency standards. Those suggestions are on top of the public funding for R&D microgrid technology and other cleantech development required for safer and more efficient transmission infrastructure and distribution.

These are only a few of the steps the Biden administration will need to take to advance nation-wide clean electricity and finance national decarbonization. The political and legal hurdles will certainly make it more difficult to do so, but not all require governance by committee.

In politics, prioritization guides the hand. The upcoming administration has prioritized climate change, seeking to embed it in every realm of policy. A climate-centered economic agenda is not only a breath of fresh air from the past four years but a signal to energy markets and global politics that the direction of travel is uniform—towards building climate solutions and meeting the challenge head-on.

This article first appeared in The Global Current