The slide into illiteracy – The COVID-19 assault on education

The Indian states, worried as they are about COVID-19 and the fatalities, need to take a calculated risk to reopen schools. While the risk to some students of contacting COVID-19 is high, the risk to the future of all students is even higher

As the world locked down last year in the face of the COVID-19 virus, millions of children were sent home from school. And, at home they stayed for 18 months – trying to learn online. Trying to substitute real life experiences with virtual experiences. And failing. António Guterres, the Secretary-General of the United Nations has called it an “an education crisis”.

18 months later there is ferocious debate on whether schools should reopen now or later. There are those who fear for children’s safety if schools reopen without students being fully inoculated. And, right now there are few vaccines aimed at the young. On the other hand, there are those who worry about children losing on valuable socialisation, education, and nutrition, in the face of shuttered schools. And, both views are valid.

In those states in India, where schools have reopened, there has been a surge in COVID-19 cases among children. In Punjab, for example, there has been a spike of COVID-19 infections amongst the school going age. Schools have been open since early August, and this period has seen a 9.6% rise in cases amongst students. Similar stories are heard from other states that have reopened schools – MP, Bihar, Gujarat.

India is not the only country to face this. In the United States in addition to the heated debate around whether or not to reopen schools, there are also violent debates around whether or not to mandate masks. In such a scenario, children are even more at risk. The American Academy of Pediatrics (AAP) raises a flag on the ‘exponential growth’ in COVID-19 cases amongst children. According to them, children made up over 25% of all cases reported in the last week of August – 250,000 school going children reported infected in just a week. In the month of August over 750,000 cases of kids with COVID were added. Other countries show similar trends.

Keeping children safe from COVID has its own set of unintended consequences. In India, there are over 264 million students of the school going age. Many of these students are first generation learners. Many are the children of daily wage workers, migrant labour, farm labour – and many rely on the school mid-day meal for nutrition. Many don’t have the luxury of separate rooms, smartphones or other connected devices, or internet connections. Over half of all the students in India study in Government Schools. And it is these students most impacted by the COVID-19 lockdowns. Over 80% of students said there were ‘lower levels of learning than when physically at school’

The dream that you can study and overcome the disparities in class and even caste – is a long held and cherished one. For the twenty years since liberalisation, many families could hope for a better tomorrow for their children. Children from deprived socio-economic backgrounds began climbing up the education and income ladder, creating a thriving middle class. And, today, that entire section of people who moved from poverty to the lower rungs of the middle class, see themselves slipping back into poverty. As jobs disappear, and new jobs seem difficult if not impossible, this class is seeing their dreams of their children making something of their life disappearing too. 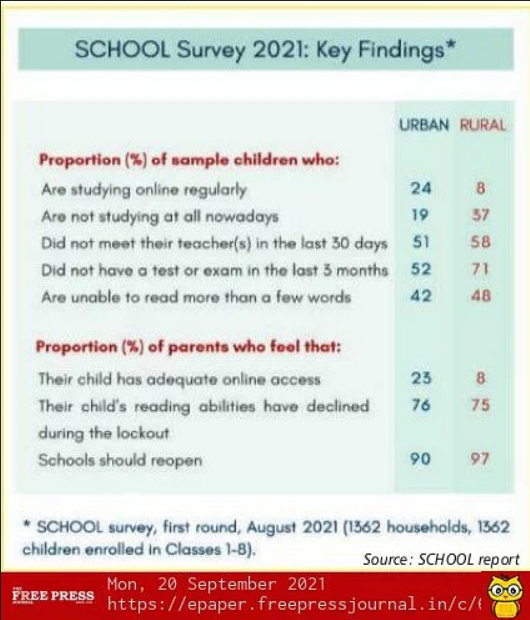 A recent report, Locked Out: Emergency Report on School Education, by School Children’s Online and Offline Learning (SCHOOL), among underprivileged households sheds light on the extent of the problem. And, that is why we need to focus on reopening schools in the safest way possible. Remote learning is not working for most Indian students. And we are seeing an ever-widening gap in disparities in education and learning, that is just likely to grow over time. While technology is a great tool for enhancing learning, face to face learning still works the best for the largest cohort of students. For students who are first generation learners, the need for a teacher is far higher, than those students who have a legacy of formal learning in their families.

Also, for technology to work best – people need access. Ownership of devices, and access to connectivity. With employment and income at an all time low, access to devices and connectivity is a luxury most can’t afford. If it is a choice between food and internet connection, nourishment will take priority. The Indian states, worried as they are about COVID-19 and the fatalities, need to take a calculated risk to reopen schools. While the risk to some students of contacting COVID-19 is high, the risk to the future of all students is even higher. We cannot afford a lost generation of learners. Schools have to reopen.

The article first appeared in The Free Press Journal